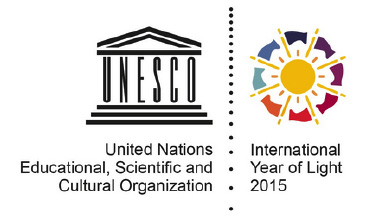 Some of the kits do not have a test tube you can use the box that the kit came in instead.
You will also get a business card with instructions and a Berroca tablet which contains 15 mg of vitamin.
Photometer
A photometer measures the intensity of light using a light detector. We use a light dependent resistor which measures the intensity of the light. When light hits detector electrons are excited so that they can conduct electricity. The resistance decreases from 20 kOhms (20,000 Ohms) in the dark to 2 kOhms in the light. To generate the light we need a light source, the kit includes four light emitting diodes (LEDs) which can produce light at different colours. They do this by pushing electrons past a barrier set up between two pieces of silicon that are doped with different chemicals. Between the materials there is an electric field barrier. As the electron are pushed over the barrier light is emitted, the bigger the barrier the higher the energy and the smaller the wavelength of light. Blue and ultraviolet have the highest energy and green and red have lower energy and therefore longer wavelengths.

Absorbance: Molecules that absorb light
We can use the photometer as a colourimeter to measure how much a molecule absorbs light. Something will appear black if it absorbs all of the colours and white if it reflects all of the colours. However if a material absorbs only a few colours then it will appear coloured. For example a red solution will absorb blue and green letting through red.

How much a molecule absorbs is called it’s absorbance. To get the absorbance we take the ratio of the light intensity that goes through divided by the light intensity without the sample, we then take the logarithm as the absorbance depends exponentially on the concentration (i.e. with more molecules light has an exponentially greater chance of being absorbed). This gives us the equation for absorbance. Absorbance can then be used to calculate the concentration using Beer-Lambert’s Law

A = εbc
Where ε is the molar absorptivity, L is the length of liquid it goes through and c is the concentration. Let’s see how to put together the photometer to measure absorbance.

Using the spectroscope we can see why it is red coloured. We can put the beaker in front of the slit and we can see that it absorbs the green and blue and lets through the red. (the colours in the spectroscope are from the fluorescent lights in the room.)

The cuvette was filled with 2mL of water and then drops of diluted food colouring added drop by drop. Use the blue LED and measure the resistance on the LDR and note it in your book.

Calculating the absorbance in excel you can plot the absorbance vs. the number of drops (concentration) and see a linear relationship between the two.

Try some other food colouring. What colours do they absorb? What LED do you need to use?

Fluorescence: Molecules that emit light
When a molecule absorbs one colour of light and emits colour we call this process fluorescence. As an example we will use Vitamin B2 or riboflavin. Riboflavin is what is in Berocca that gives it the bright yellow colour it absorbs blue light and emits green/red light.

It is helpful to look at a spectrum so we know what LED colour to choose and what detector to use.

The blue line is the excitation intensity or where riboflavin absorbs and the red line is the wavelengths riboflavin emits light in the green/red region. Previously we put a battery on the LED (applied a voltage) and used it to generate light. We can also shine light on an LED and it can generate a small voltage. As we have colour LED these will only let through the colour they are. This means we can use the colour LEDs to detect only a certain colour. For example we can excite with blue light and detect red light using the red LED by measuring the voltage of the red LED on the multimeter.

Let’s see how to set up the photometer in fluorescence mode.

Using the UV LED to excite the riboflavin and measuring the light intensity using a red LED as the detector. We can relate the concentration to the light reading as shown below.

We found that by putting some red cellophane over the LDR at right angles you could measure a larger range of dilutions.

Why does the signal taper off?

Extensions
We have used this kit to measure nitrates in water.

You can also buy kits for phosphates and pH also. Check out the levels of these in your local river to
see if you have too much fertilizer in your local water. Why not connect the photometer to you computer. You can buy an Arduino online for $20-30 and attach the pins of the LDR and LED to it. Writing some code you can read off the LDR reading onto the computer.

Then you can measure things over time. For example you could mix sugar and yeast and measure how the yeast grow over time on the computer.

If you want to know more about the LDR here is a plot of how the resitance changes with the LUX which is a measure of the light intensity.

Here are some typical lux values. See if you can measure lux values. You could move away from a light bulb and see how the light intensity drops as a function of distance.

The LED we have given you put out light in a narrow range here are some plots of the spectrum of the different LEDs.

If you come up with a cool experiment share it online here!

Real scientists tell other people what they have found, and discuss what it might mean. You can do this below. Enter what you found as text, photos or video. Chat with others doing this experiment. Compare results. Learn stuff!

Theme by Anders Noren — Up ↑